Facebook’s Safety Check lets you notify friends and family that you’re safe after a natural disaster or “human disaster.” Robinson Meyer wrote about it in the Atlantic.

To know, within an hour or two of an event, that someone is safe: It’s so valuable, so emotionally practical, as to be almost priceless. It is anti-terror, in a way: It says, be not afraid. And in the three places where it was first deployed—Afghanistan, Chile, and Nepal, all three after major earthquakes—its activation made a lot of sense, because earthquakes are events which by their nature can affect millions over huge swaths of territory.

But earthquakes and cyclones are not themselves public-facing events. Terrorist attacks are. As Brian Jenkins, a terrorism scholar at the RAND Corporation, writes, “terrorism is aimed at the people watching.” Terrorism is a public-relations campaign with guns and bombs. It weaponizes culture, and it exploits journalistic concern for heinous violence to grab media attention and get pathology taken instead as politics.

Through its bedrock appeals to friendship, community, public identity, and activism—and its commercial exploitation of these values—Facebook is an unprecedented synthesis of corporate and public spaces. The corporation’s social contract with users is ambitious, yet neither its governance system nor its young ruler seem trustworthy.

The recent absence of regular posting here has mainly been due to project overload on my part. For the last week I’ve been focusing on my activist wifi project, Occupy.here. On Saturday I participated in FEAST Brooklyn, a kind of science fair exposition for community art projects. The way it works is everyone who attends pays $20 for a banquet dinner and a vote for which project of ten should be funded. I did not receive funding, but I got a lot of great feedback and my first round of user testing with about a dozen people trying the project out.

I was satisfied to see the technology performing flawlessly. As far as I know, everyone who tried to was able to join the wifi network and participate in the online forum. I still consider myself a newbie to wifi hacking and programming in Lua, but I’ve mustered enough stability to start paying more attention to interaction design and social dynamics. Seeing how people used the software in practice was really interesting. It seems obvious in retrospect, but presenting an anonymous message forum to such a festive audience yielded an uncomplicated gregarious kind of conversation.

While the forum’s conversation didn’t cover politics or the Occupy movement, the invisible backchannel aspect of it was compelling. The first, most active, message thread was about the food at the event. Apparently the cheese was a big hit, although sadly I wasn’t able to try it myself. This thread included the forum’s first hash tag, #CheeseRevolution, and a long string of emoji burgers. In another thread an attendee complained they’d come to the event without a date, boldly listing a phone number that presumably belongs to the lonely author. I was amused to see the AOL-era “ASL” (age/sex/location) inquiry and “Anyone got any weed?” It was silly and fun, and felt entirely appropriate to the event.

How the discussion is framed in a broader social context is very important. In the deployment at FEAST, users were offered an open architecture without many cues about which topics of conversation the forum is meant to support. The next iteration will feature a more prominent introduction to the Occupy.here platform and host an archive of essays and media about the Occupy movement from a variety of sources.

I’m interested to see what effect, if any, these changes have on the subject and character of conversations. I wonder if deemphasizing the message forum might preclude conversation altogether, favoring a passive mode of media consumption. I’ll gather some usage data to see how many users browse without participating.

Users identified themselves about 50% of the time, half posting under the default handle “Anonymous” and half adopting first names or two letter initials. For my next round of testing I’m going to adjust the interface where users select their usernames, perhaps not offering a default option. I’m still committed to supporting anonymity, despite the challenges it creates in reaching higher level discussions. I do think it’s possible and perhaps making all users uniquely identifiable might contribute toward discussions with slightly more substance.

Probably the most important factor for user behavior is the physical (and social) context the wifi router appears in. This coming Saturday I’ll be showing Occupy.here at the Activist Technology Demo Day event at Eyebeam. I’m guessing the audience will be more oriented toward technology and activism. The location of the venue, in Chelsea rather than Greenpoint, will also have some bearing on the next round of users. That’s a lot of variables changing at once, but I’ll be sure to post my decidedly non-scientific findings next week.

It’s about finding joy in randomness.

For most users of all ages – but especially teens – the Internet today is about socializing with people you already know. But I used to love the randomness of the Internet. I can’t tell you how formative it was for me to grow up talking to all sorts of random people online. So I feel pretty depressed every time I watch people flip out about the dangers of talking to strangers. Strangers helped me become who I was. Strangers taught me about a different world than what I knew in my small town. Strangers allowed me to see from a different perspective. Strangers introduced me to academia, gender theory, Ivy League colleges, the politics of war, etc.

I completely agree, ChatRoulette feels like my first experiences meeting random people in AOL chat rooms. But I can also understand why many people would find it too creepy to try out.

There’s an iPhone app called PhotoSwap that operates on a similar principle. It’s also fun, but it’s too bogged down by those who tag their suggestive, but PG-rated, images “NR” for no reporting to the system administrators.

10 reasons to turn Google Buzz off

I’m going to stick around to see how Google Buzz develops, but Mushon does make some good points. 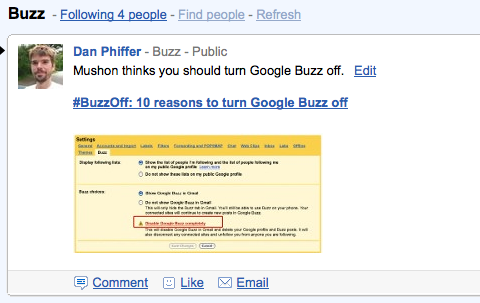 I couldn’t help but to post this link to Buzz as well.

Update: I changed my mind. Buzz is turned off.

There’s a lot going on in these three screenshots. It’s not surprising that the creator of Meetup might know how to use this thing.

Google is known for releasing new products before they are fully ready and then improving them over time. But its decision to do so with Buzz, coupled with its introduction to all 176 million Gmail users by default, appears to have backfired.